Posted by Jeff Clarke on Friday, 07 November 2014 in My Blog

Touchdown in Malaga! As the majority of the Cheshire Mammal Group posse disembarked the flight
hopes were riding high. We crammed our luggage into the two hire cars and realised there was no
space left for passengers. Mmm... this was going to be interesting!

The drive was not without its moments. I for one will never forget that the word for insulin in
Spanish is insulina and how the addition of that one letter renders what you are saying
completely unintelligible to a Spanish Doctor and his multitude of clinical practitioners.
Panic over we approached our destination and discovered the track down to the villa was having a
fiesta of potholes. Three passengers were ejected to allow the luggage laden jalopy to scrape
along the surface to our white-walled comfortably rustic Casa.

14 miles across the Straits of Gibraltar lay the buttress ramparts of the Rif mountains. It sends
out a siren call to multi-millions of avian migrants and over the space of just a week we hoped
to connect with our own share. If you had picked a spot witnessing raptor migration then you
could not have bettered it, which is fortunate, as that's exactly why we booked it.
The Levanter wind cranked up a notch as if to celebrate our arrival. A wind that would deliver us
a river of raptors over the coming days, but would also delay our destiny with the denizens of
the deep as the the white-horses galloped across the blue void between two continents. 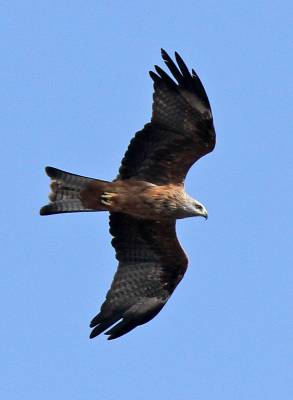 The final two members of the crew did not arrive until close to midnight and went to bed intheir little caravan anticipating that they would wake to a stunning view of Africa. They got up. It was foggy in the straits!

Compensations came aplenty as a procession of Black Kites and Honey Buzzards paraded along the
low ridge of hills just above our villa. Whimbrels whistled around the coastal cliffs, while
Stonechats and Sardinian Warblers tutted from posts and beds of phragmites. Out to sea Cory's
Shearwaters careened by close to shore and Thekla Larks delivered liquid notes as they tootled
about the cow ravaged grasslands.The 'Kroop' of Bee-eaters would become a symphonic backdrop to
our week in Tarifa, as wave after wave gathered their courage and guzzled bees before launching
out, in an excited melee, toward the Moroccan shore.There are worse places to spend a week. 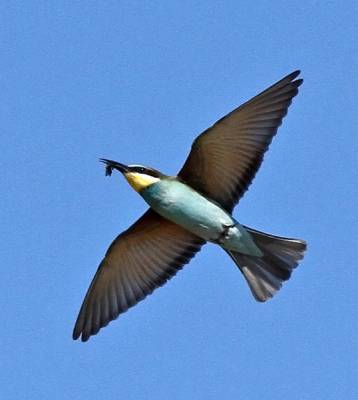 Bee-eater at Tarifa
There were many magical highs that week and one massive low. Let's get the low out of the way
first. Gibraltar. Lets' be honest it's an anachronistic dump! The so called 'Nature Reserve' on
the rock has more litter strewn across its vista than a municipal tip and the place is populated
with Little Englanders that make UKIP voters look like Europhiles.The only downside to giving it
back to Spain would be the thought of those open-minded souls coming back to live in mainland
Britain.

So on with the good stuff. After getting our bearings on day one, the next saw the team gathered
on the Castle steps of Castillo de Castellar. Kettle after kettle of soaring raptors streamed
through in their hundreds; a few pale phase Booted Eagles joining the massed procession of Honey
Buzzards and kites. The same locale would also furnish us with the first of our White-rumped
Swifts. 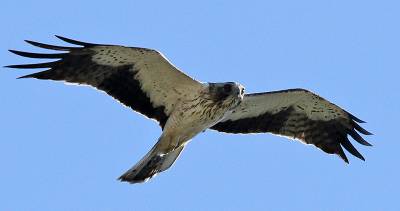 Later that day we caught up with an invertebrate with a magically evocative name. The Two-tailed
Pasha, a beast of a butterfly, better even than the majestic Monarch's we delighted in watching
sip nectar from lantana's on the banks of the Rio Guardarranque, as it  snaked it's way through
Los Alcornales. 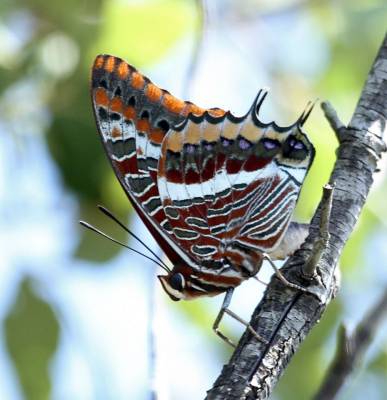 Let's not forget we are a mammal group and so as the Levanter loosed its grip we headed out into
the Straits of Gibraltar. Our first excursion was with Turmares. Our target was the big Black and
White, but it was not to be, so we contented ourselves with boisterous Striped and Bottlenose
Dolphins and some rather less energetic Long-finned Pilot Whales. The Wilson's Storm Petrel
crossing the bow was just a tubenose bonus. 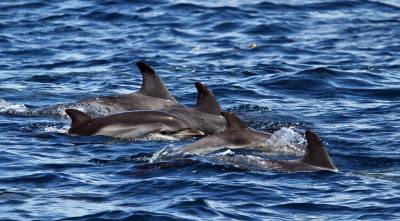 Our party contained a number of inveterate rock rummagers and young Ben Miles showed up his
elders by putting in the effort and prizing out most of the gems. Occelated Lizard, Viperine
Snake, Bedriaga's and Western Three-toed Skink were good, but a Mediterranean Chameleon found in
a Broom bush on the dunes of De Valderqueros took top prize. Though the many Spiny-footed Lizard
at that locality gave themselves up more easily. 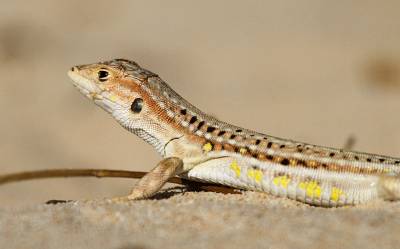 One timely return to base camp coincided with a feeding frenzy of Bee-eaters and we sat spellbound
in the vehicles as hundreds of them whipped across the bonnet, snatching bees in front to the
windscreen and even bumping into each other as two birds headed for the same bee. What a pity the
camera was in the boot!

Undaunted by our initial failure with the monochrome mega-dolphin, we tried again. This time with
the FIRMM dolphin research team. This is a very cetacean welfare conscious organisation and the
one I'd recommend.Once again Bottlenose came to play and after a time we were surrounded by
hundreds of Stripey's all heading quietly away from Tarifa and towards the Moroccan side of the
straits. Out of time we headed for port only to discover just why all the dolphins had been
heading away from the Spanish side. The murmuring of Orca reached the ears of the passengers
and after what seemed like an eternity the water erupted and a pod of Orcas surfaced close to our
port side. The camera shutters whirred almost as quickly hearts were beating. An emotional high
for all of us on board.Back in blighty analysis of our images revealed our Orcas to be part of
the Morales’ subpod and the male is called Pingu. 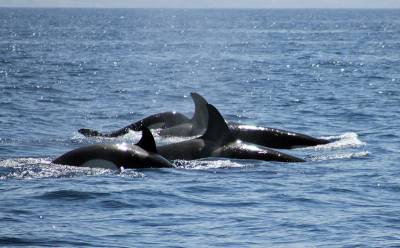 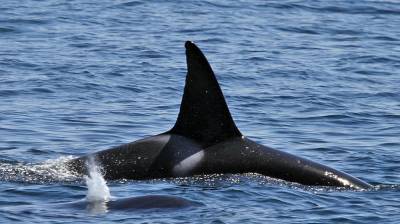 Pingu and the Morales sub-pod
In the blink of an eye we seemed to be packing up our vehicles for the return trip to Malaga
airport, but Tarifa had one more gift to bestow. The Levanter was back as were the raptors and so
it was that in the dying minutes of our stay I finally nailed a decent shot of a Honey Buzzard. I for one cannot wait to return! 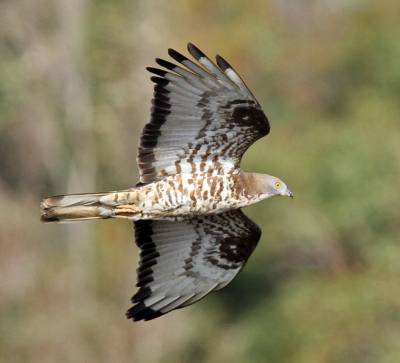