Posted by Jeff Clarke on Tuesday, 29 December 2015 in My Blog 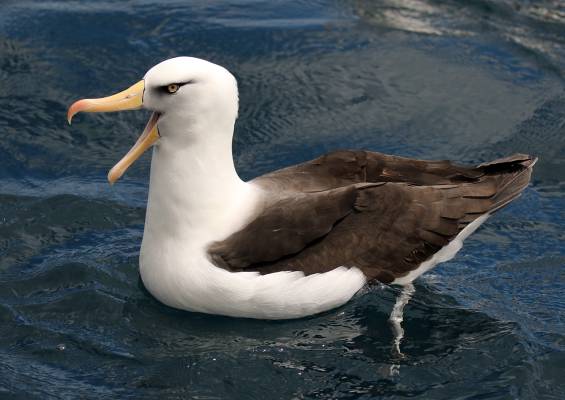 The thing about New Zealand is that it’s a lot bigger than you think it is and it also takes longer to get to places than you expect. In 2012 we had to give up on the idea of getting to Stewart Island/Rakiura but this time we rectified the omission by scheduling a three day visit.

To get there you cross the Foveaux Strait from Bluff by ferry (or small plane). Just before we boarded I jokingly mentioned to my Wife and friends that it was usually referred to as the ‘Notorious’ Foveaux Strait. They had the last laugh as I was the one who succumbed to seasickness on the one-hour rollercoaster crossing. I noted a few White-capped Albatrosses trailing in our wake, but the swell and the spray made birding untenable.

We stayed at the lovely Anchorstone Cottages just outside the settlement of Oban and the first thing that strikes you about Stewart Island is the soundscape with endemic Tui’s, Bellbirds, South Island Tomtits and South Island Kaka’s dominating. We had barely warmed the kettle when the first Kaka tapped on the window requesting to be fed. 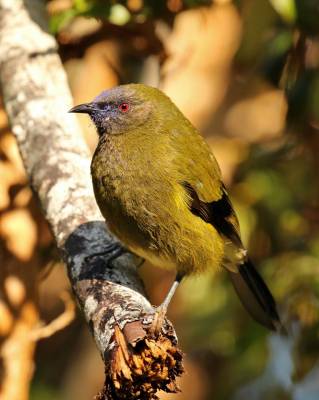 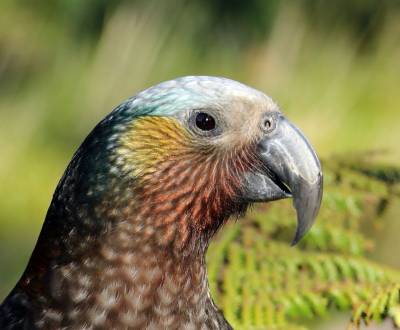 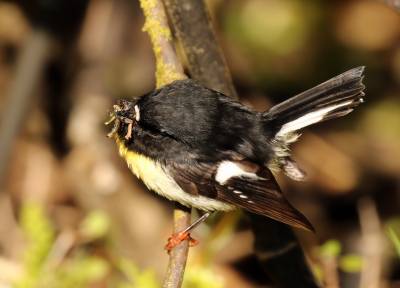 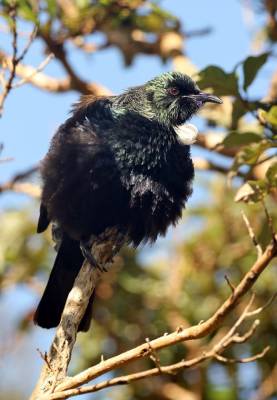 We were here to enjoy the ‘Birding Bonanza’ a triple bill of Ulva Island, Pelagic and kiwi watching. However our first mission that day was to sample the famous Blue Cod and Chips down in the township.

Early then next morning we joined Ulva Goodwillie, our guide for the Ulva’s Guided Walks element. It’s not that we were incapable of finding most of the birds ourselves but Ulva knows the island inside-out and just where the various species are likely to be found as she has been intimately involved with so much of the restoration work. We hadn’t even left the wharf when the first Stewart Island Weka walked nonchalantly passed our group. A few minutes later we clapped eyes on our first South Island Saddleback; a bird rescued from near extinction in 1964, fewer than 2000 still exist in the wild. 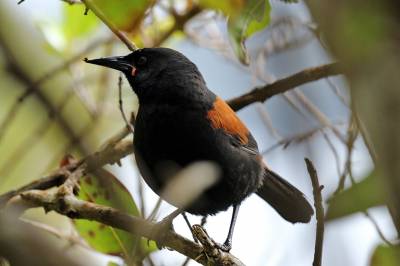 We spent some considerable time enjoying the delights of the Stewart Island Robin, a sub-species of South Island Robin. These birds are exceptionally tame and would vibrate their feet to disturb prey items within touching distance of their observers. A we wondered through the bush Yellow-fronted and Red-fronted Parakeets (Kakariki) flew around noisily, but my next photo opportunity came from a bird whose calls are so high pitched many folks just can’t hear them at all. I was delighted to get superb views of a male Rifleman in reasonable light. This diminutive, almost tailless, bird is endemic to New Zealand and thankfully this ancient avian sprite thrives in areas of native forest where non-native predator control is carried out extensively and diligently. 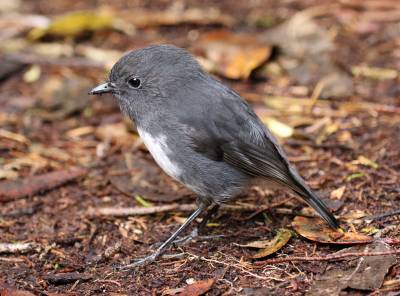 No nature conservationist would normally subscribe to predator control but in New Zealand it is essential as the native wildlife has no defence against introduced land predators. When I’m there I buy ‘possum socks’ to help support the non-native predator control. This is endorsed by the Worldwide Fund for Nature. 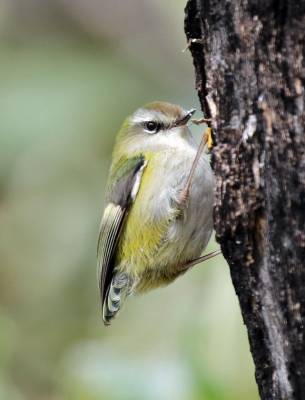 We moved on through Ulva Island’s dense woodland, finding a snoozing Morepork in a dense Rimu tree. The only bit of it that was exposed was its vent so I thought I’d save you from that and leave out the image. A series of trilling calls and some peeps revealed a travelling flock of Brown Creeper and also a bird I’d missed on my last visit, the dazzling Yellowhead. In the murk of the forest I was lucky to get any image so I was happy with a few ‘record’ shots. One person in our party had never previously seen Fantail so we did a little squeaking and a couple of them also duly obliged. 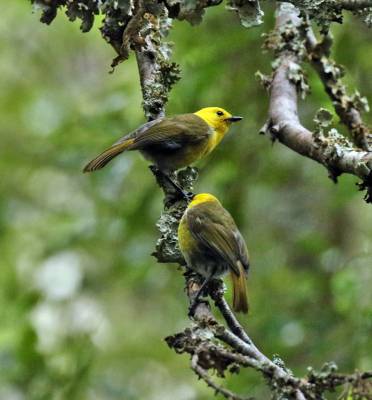 It was time to depart Ulva Island and join Aurora Charters for a brilliant pelagic out into the waters south and east of Stewart Island. We hadn’t travelled very far when we encountered our first Fiordland-crested Penguin, sadly they were sticking deep into the coastal caves and were not in the mood for a close-up. 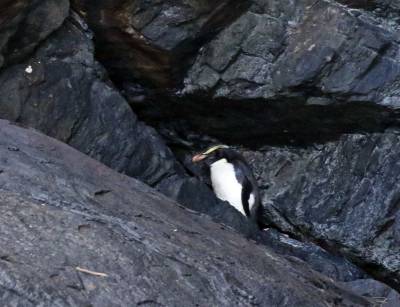 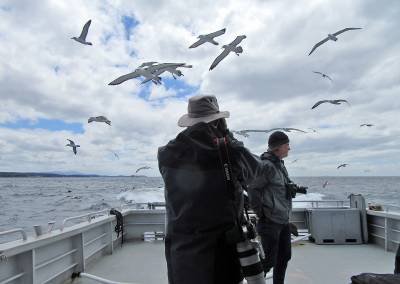 As we travelled out we gathered a large entourage of White capped Albatrosses and immediately we started chumming at least 30 birds surrounded the boat. Initially though they had to give way to a couple of Brown Skua. We were soon joined by couple of Salvin’s Albatross and a handful of Southern Royal Albatross. The star bird was however a stunning looking adult Campbell Albatross. Its fierce golden eyes giving it an intimidating expression. 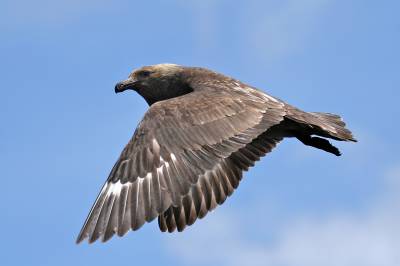 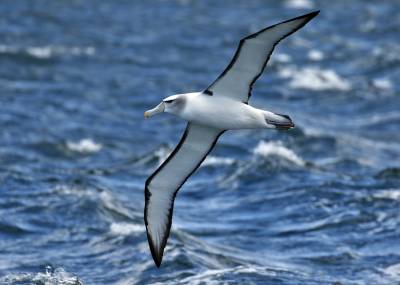 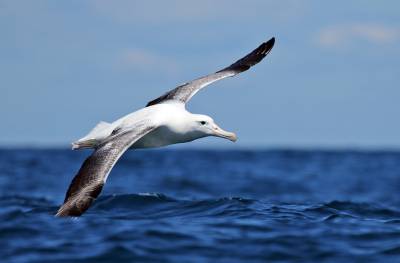 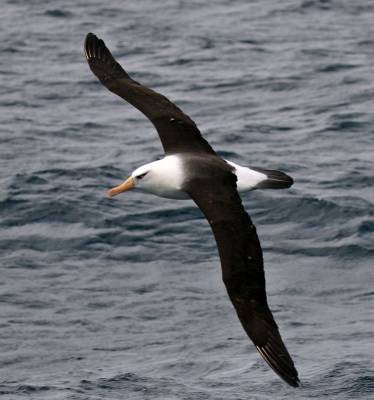 The Northern Giant Petrels were largely kept at bay by the pack of White-caps, Cape Petrels made a few raiding sorties and most of the other seabirds were flybys. A Black-bellied Storm-Petrel was followed a few minutes later by Wilson’s Storm-Petrel, Sooty Shearwaters were everywhere but seldom close enough for a good photo and the same applied to the Fairy Prions, Common Diving, Cook’s and White Chinned Petrel’s, but it was a great spectacle all the same. As we made for Oban we dropped in on a few islets and in search of Yellow-Eyed Penguin. They were not playing today but the Spotted Shags, Stewart Island and Pied Shags were readily observed at their nesting ledges. 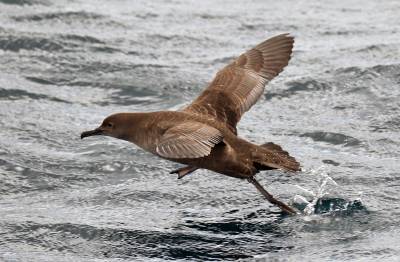 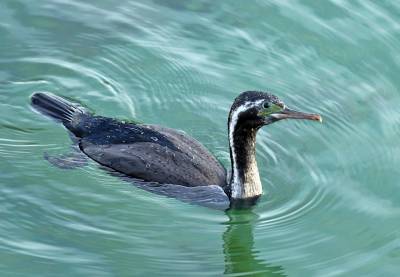 After a quick break for food it was time to get back on a boat with Bravo Adventure Cruises as we headed out into Peterson Inlet in pursuit of Stewart Island Kiwi as dusk fell hard we approached our landing. We walked quietly along a bush trail and in last vestiges of daylight our guide found the first Kiwi. Most of the party managed a glimpse before we continued on toward our primary destination. A beach, but no ordinary beach, this is the one used by the BBC to film Kiwi and this is where we would get a superb view of a full grown female Stewart Island Kiwi as she snorted her way through the small patches of seaweed before plunging in her beak to the hilt in pursuit of sandhoppers. I managed a few barely passable record shots in the soft light of the guide’s torch. (no flash allowed here). We spent a good 20 minutes in her presence and she was completely undisturbed by our proximity. 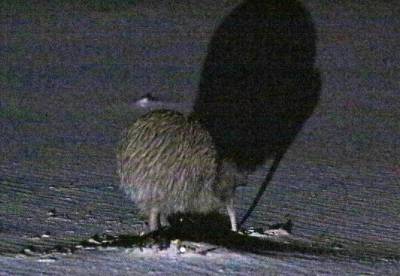 Time passed in the blink of an eye. We trooped back through the inky blackness to our boat and there we toasted a simply amazing birding day with some hot chocolate.