Posted by Jeff Clarke on Sunday, 21 December 2014 in My Blog 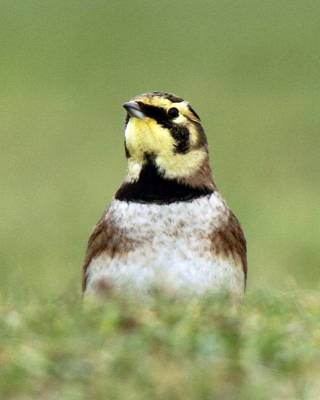 As I cast my eye at the weather forecast a small window of opportunity beckoned. I fired up the jalopy and headed for the delights of...Fleetwood, or should I say delight? Fleetwood has little to commend it, save for the fact that it marks the south-western point of Morecambe Bay. Though this is a bit rich coming from a guy who's home town's best asset is the fact it is easy to get out of.

My target was a small stretch of shingle encrusted shoreline known as Rossall Point, a noted haunt of waders and wildfowl, it also has a damned impressive tower hide leaning out into the estuary. Just to be perverse my camera would however be pointed at a passerine (or two). As I scanned the strandline for my quarry I spotted a small knot of birders with big lenses in the distance and soon discovered the were pointed at a typically confiding Snow Bunting, as this is one of my favourite birds I thought it would be rude not to take a few (hundred) photographs of it. The promised sunshine was liquefied by a veil of drizzling cloud so shutter speeds were compromised. Nonetheless at least a few of my images were pleasing, if not world beating. The bird conveniently wing stretched to confirm it as a first winter female of the race 'insulae' from Iceland.

Lovely as a Snow Bunting may be, it wasn't the primary focus of my attention today. Thankfully the Shorelark that had been frequenting the 'Point' for the previous fortnight eventually made an appearance. Of late this ‘horned’ bird has become something of a rarity, especially on the West coast and it had been a couple of years since I had last enjoyed an encounter with one. When I'm trying to photograph a particular bird I like to watch its habits for a while and try to anticipate its movements so that I can be in the right place to get a decent image, I also try to get away from the crowd.

At first the bird was rather distant but what struck me was how effective the bird’s facial pattern was at breaking up its outline among the pebbles and flotsam, like a mini Ringed Plover. The bird moved with the typical restless jerky shuffle of many larks. It flew a couple of hundred metres and resumed its foraging. This gave me my chance, between me and the bird stood a groyne (which sounds disturbingly like a line from a misogynist comedian from the 1970’s) it would provide the perfect screen and together with noted bird photographer Steve Young we took up position. I noted my shutter speed 130th/second, but I was loathe to ramp up the ISO rating and decided to gamble on pressing the shutter as often as possible in the hope of finding the bird momentarily at rest. It was fast and furious but I had a hunch at least one of my images would be better than a 'poke in the eye'. As the bird trundled past us just a few feet way it took off and was lost to view for some time.

The bird had relocated to the picnic field adjacent to the car park, not as aesthetically pleasing as the shoreline, but beggars can’t be choosers and over the next couple of hours I lay on the grass trying to get decent shots of the bird. This takes skill patience and time. The bird photographers were all very respectful of the bird and didn't flush it. Unlike the two (separate) elderly male dog walkers who deliberately threw balls right at the bird for their dogs to chase with the inevitable result. The gathered birdwatchers and photographers were unbelievably restrained. These acts of deliberate sabotage by dog walkers (they are always male by the way) have happened to me on a number of occasions. I challenged one knuckle-dragger on Pensarn beach, he had all but trodden on me in his bid to disrupt my photography and his response was "I don't care, I'll walk where I like". Thankfully the majority of dog owners are not at all like this.

So I'm going to concentrate on the positives and finish on the thought that my first visit to Rossall Point had been a photographic success (especially considering that my previous two photo sessions hadn't produced a single image) and I'd had the pleasure of spending a considerable period of time in close proximity to two of my favourite bird species. Not a bad way to spend a winter's day and definitely better than a 'poke in the eye'!